A WORLD AWAITS YOU AT THE STAGE

Being a theatre of and for the people, we offer a wide variety of performances from August - June.

Most performances are aimed at a national audience and performed in Danish. On select days we offer live subtitles in English to your mobile device.

Join us for guided tours of Aarhus Teater in English on select dates in July and August.

An English-speaking guide will take you through the history of the house, the architecture and and decorations. And we leave no stone unturned as you visit not only the stages, but also the workshops, the propmasters basement etc.

The Theater is closed in July.

Or send us an email at billet@aarhusteater.dk

Tickets can also be purchased online. Simply click on the black bar stated "GÅ TIL KØB"

Aarhus Teater offers 4 stages in a variety of scales. This is also reflected on the price range.

The grand stage is our largest venue and often the centerpiece of great musicals and lavish dramas. Prices vary from 145 - 490 DKK.

Our two intimate venues is for the experiments and first time performances of newly written plays. Prices are set at 130 DKK.

Students and people under 25 can purchase tickets to any perfomance at just 80 DKK. On Store Scene seleceted seats.

BOOK A TOUR OF AARHUS TEATER

Select Saturdays throughout the year we offer public tours and a chance to check out every nook and cranny of the theater.

A guide will take you through the history of the house, the architecture and and decorations. And we leave no stone unturned as you visit not only the stages of perfomance, but also the workshops, the propmasters basement etc.

The tour starts at the steps of the theatres main entrance on Teatergaden at 9.30 and lasts app. 90 minutes.
Entrance fee of 70 DKK / 55 DKK for students

Tours are perfomed in respect to the artistic processes. There may be rehersals or works in progress, which means we cannot guarantee a visit to all sets and workshops.

Please note tours are in Danish only. English guided tours must be booked in advance. 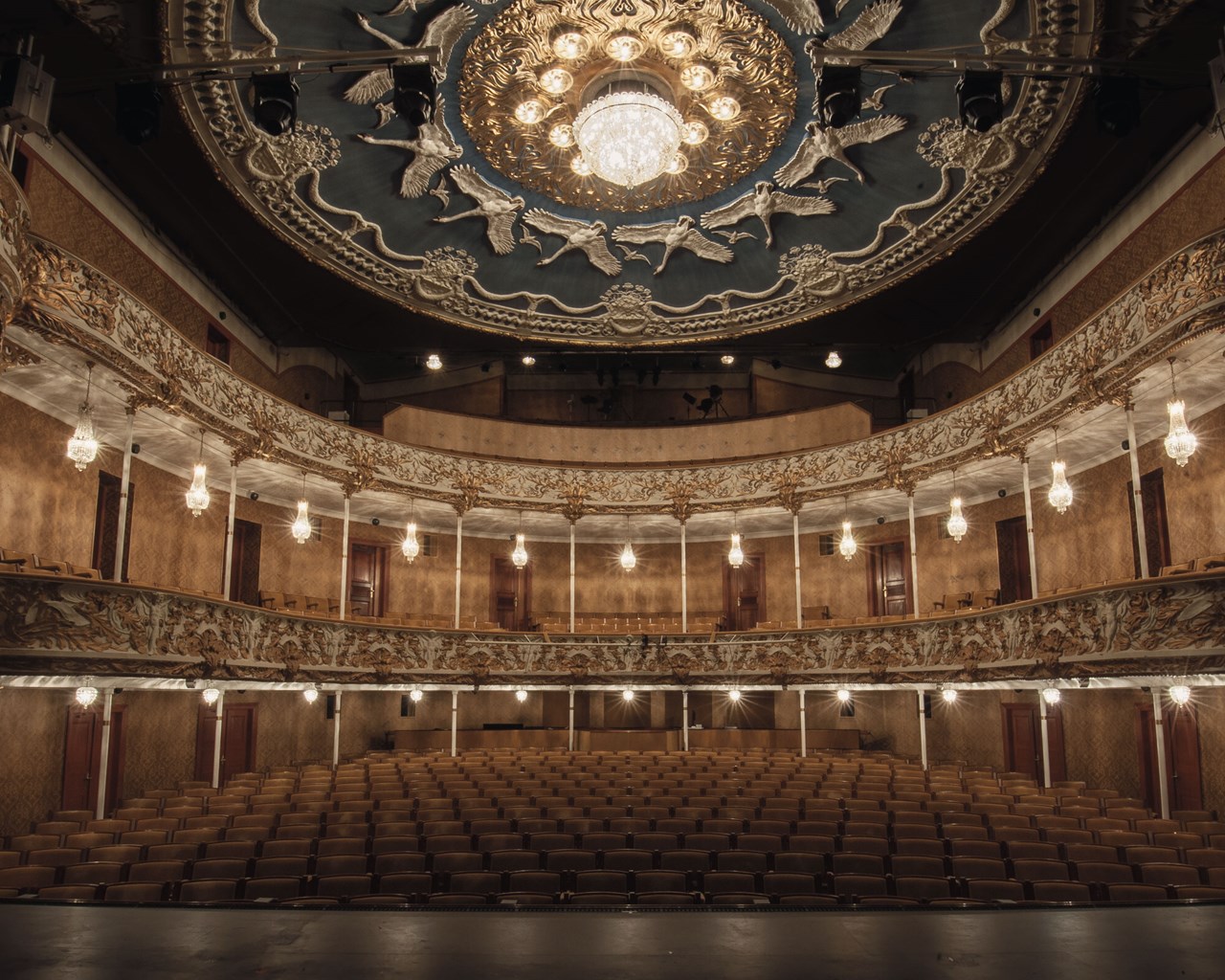 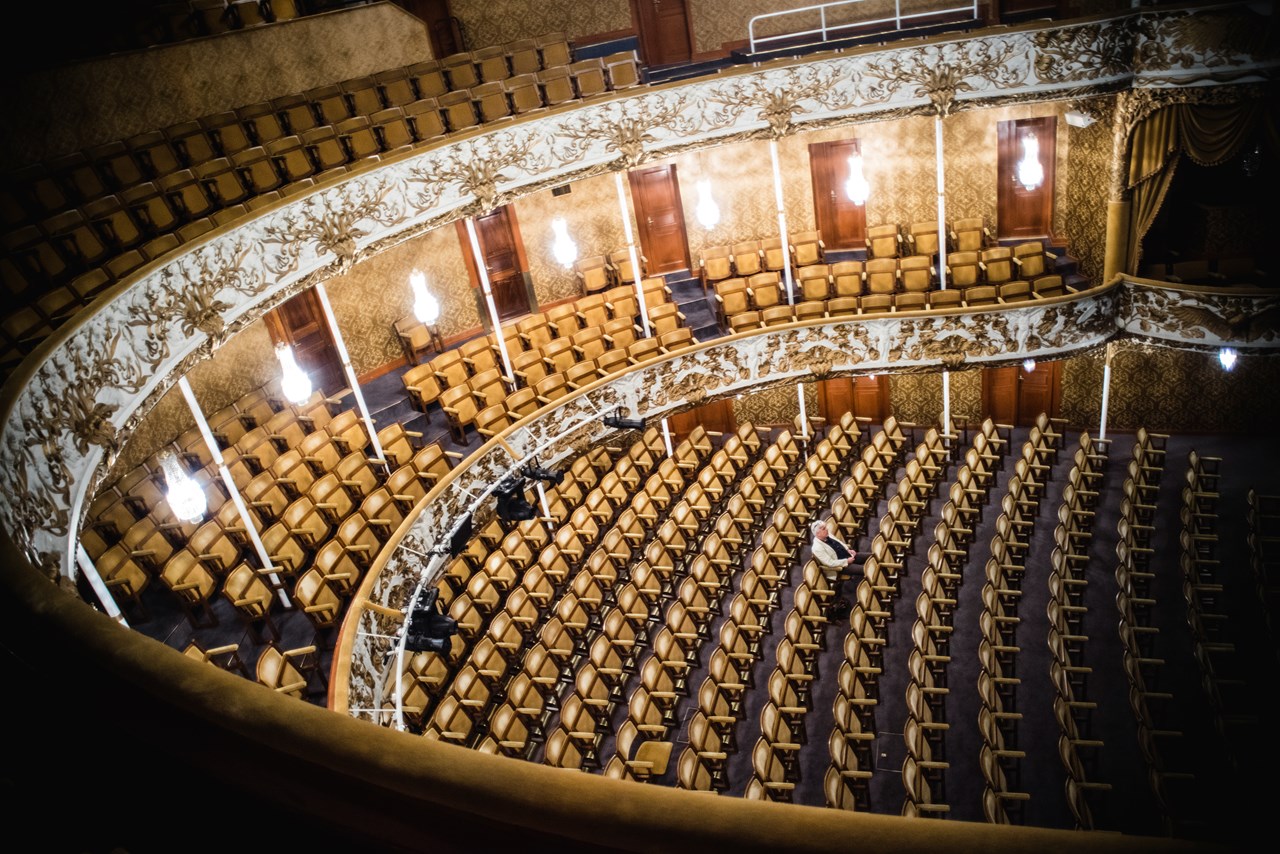 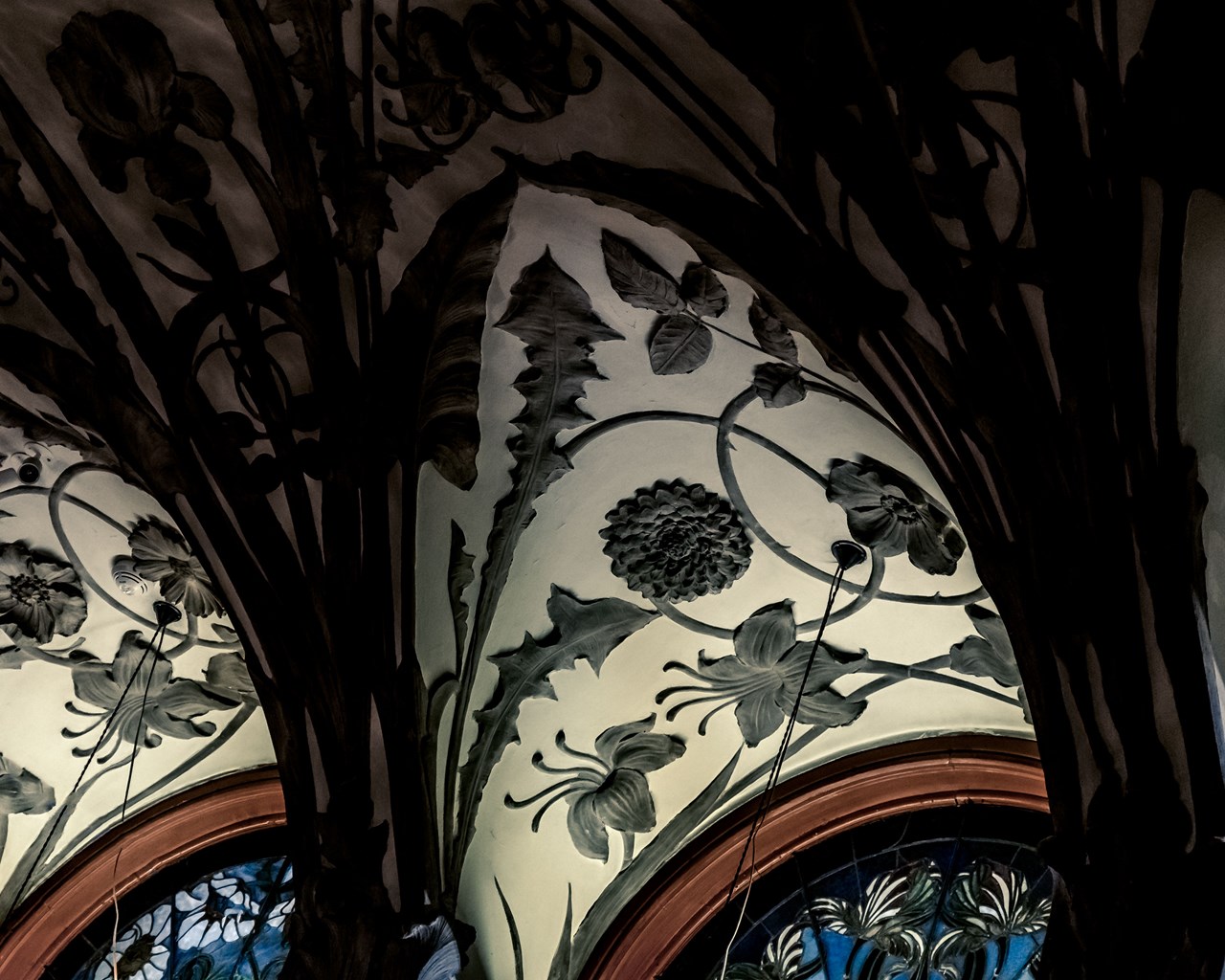 A LONG TIME AGO IN A GALAXY FAR, FAR AWAY...

Though designed in the late 1890s, Aarhus Teater has inadvertently become quite intertwined with the Star Wars universe. Prior to the relaunch of the Star Wars franchise in 2016 an alert staff member at the theatre discovered that seen from above, the theatre carries a strong resemblance to the iconic Star Destroyers from the Star Wars movies.

Since the publication of this coincidence the theatre building has appeared on memes and social media worldwide.

Check it out on Google Maps: HTTPS://GOO.GL/AGYFRG

Inaugurated in 1900, we are the largest regional stage in Denmark

Aarhus Teater was built in the 1890s at the initiative of the citizens of Aarhus. The building is an architectonic gem of the Jugend style. It was inaugurated on September 15th in 1900 and became a listed landmark in 1990.

The theatre has kept is original grandeur as a cultural powerhouse in the secondlargest city of Denmark. It contains 4 stages with a total capacity of 1200 seats.

Aarhus Teater was designed by Hack Kampmann, who also was responsible for several other significant buildings of the time in Aarhus including the royal residence Marselisborg Slot.

The lavishly adorned façade of the Aarhus Theatre has an enticing magic of its very own, and the spell and allure are even greater when you pass through the doors and enter the theatre with its glittering chandeliers and extravagantly gold-decorated ceilings and interiors.

Under the balcony can be seen the town arms of Aarhus: a shield with a portal and two towers, symbolising the early church of the town. The waves testify to the location near the sea and above the portal is seen a moon and a seven-pointed star, a traditional symbol for warding off evil. Inside the portal is seen the guardian angel of the town Saint Clement with an anchor and the apostle Paul with a sword pointed at the earth, signifying peace.

Inspired by the classical form of a traditional temple, the frontispiece is decorated with a scene from the play Maskerade by Ludvig Holberg. Being often named as the father of Danish comedies, Holberg was a given choice to signify the building as a theatre. The decoration is an original piece made of ceramic mosaic by artist Karl Hansen-Reistrup

The promenade inside the building is further decorated in stucco with scenes from two other Danish theatre classics: The musical comedies Elves´Hill by Johan Ludvig Heiberg and Genboerne by Jens Christian Hostrup

3) The dragon on top

It is evident in original drawings that architect Kampmann at one point had wanted to decorate the roof of the theatre with classical motives such as Apollo, the three Graces and the musical instrument lyre. Only residue of this plan is the tiny lyres on the gutters.

How and when the decoration turned into a troll/dragon/gargoyle/devil is unknown. One supposed reason is the fashion of the time of adding gothic elements to designs. Hansen-Reistrup used the same motif in his ceramics.

A die-hard but unsubstantiated rumour has it that Kampmann added the devil due to his personal disdain for the neighbouring cathedral and the clergy in general. The rumour is easily discredited when considering that Kampmann during a long period of time was responsible for the renovations and restoration of the Cathedral. Furthermore, he designed the clock on the bell tower.

Whichever way, the devil was with great interest from the citizens and media of the town placed on the roof on September 13th 1900, two days before the official opening of the theatre.

The Theater Café opened in 1900 at the same time as Aarhus Teater was inaugurated. The rooms are now home to Café Hack, named after the architect Hack Kampmann. Besides its café and restaurant, the original establishment hosted a range of entertainment, music, vaudevilles and such in various forms – and varied quality! During WWII the café became a favourite hangout of the German occupational force and the local prostitutes and the café suffered from the bad reputation the years that followed the war. The empty rooms where in 1948 transformed to accommodate the proper first School of Acting of Aarhus Teater. As such it was used for decades, interspersed with periods as an open stage and as home to the radio drama division of Danmarks Radio. The café reopened in its current form as Café Hack in 2001.

In 1906 the right side annex of Aarhus Teater became host to the second movie theater in town, Fotorama. Many of the silent movies and news reels shown were produced in Aarhus, which at the time had a thriving movie industry and were known as the Hollywood of Denmark. Many of the actors and actresses from Aarhus Teater had decent side careers in the movies. The movie theater functioned in the annex up until 1954, when the newly added Scala stage provided a much improved location. The annex has since hosted the acting school, as a stage and as a ticket office in its current form. The movie theater closed in 1981, but the room is very much in use as a theatrical stage.

6) Decoration in the detail

During the build of the theater a drinking cup from the Viking era decorated with a gilded bronze eagle was discovered. Kampmann became so thrilled by the find, that he wrote his one and only article ever, which was printed in a publication on prehistoric finds. Furthermore, he decided that in reference to the find, eagles should also be a main motif on the frieze of the theatre. The ceramic frieze was fabricated at the famous Kähler factory and when the theatre was expanded by the addition of the Scala stage in 1954, more eagles were produced using the original mold at the same factory. And so the eagles decorate the frieze in the entirety of the current building.

Also decorating the building is the classic comedy and tragedy masks, one happy and one sad, known universally as a symbol of theatrical work. The masks of Aarhus Teater was inspired by a mosaic from the House of the Faun in Pompeii of which Kampmann had drawn a watercolour of on his travels in Italy.